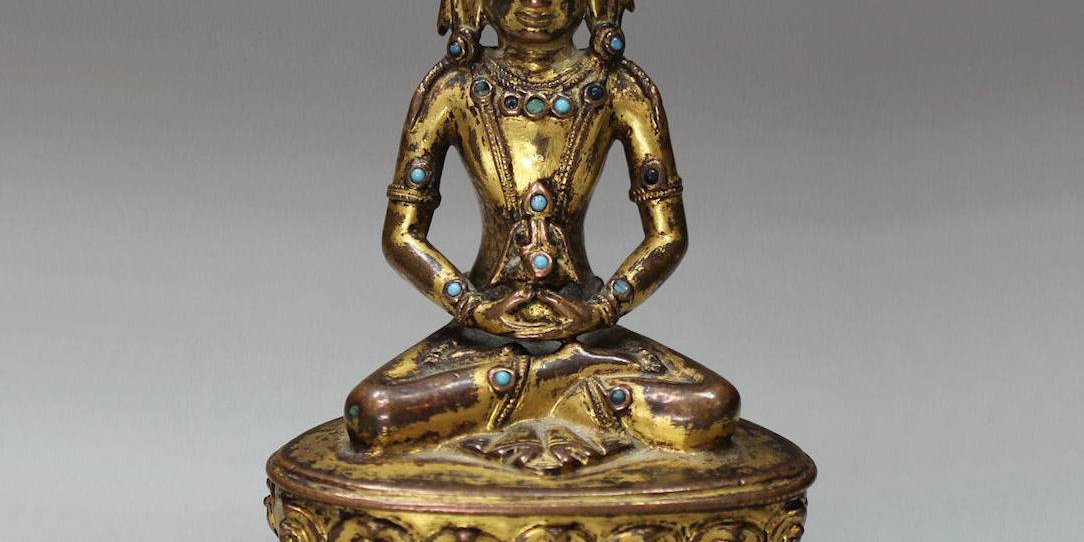 Buddhist Figures and their Asian Context

The rapid increase in travel over the last century has led to many people globally becoming familiar with the figure of the Buddha, and very many Buddhist statues are now to be found in the West, from the sublime figures in the major museum collections to the more commonplace ones to be found along virtually every High Street. Buddhism is also a growing spiritual presence in the West, often (and often wrongly) because it is sometimes considered not to require assent to a series of beliefs.

Collectors beginning to study Buddhist art rapidly become aware of the large variety of figures represented, not only in terms of the cultures and times from which they emerged, but also in terms of the beliefs they represent. This article will attempt to give a brief historical survey of the Buddhist contexts which produced such fascinating and artistically accomplished figures.

Siddhartha Guatama was born in the 6th C BCE, in a time of rapid economic and political change not only in his locality in the Gangetic Plain but across the Old World. This was the time often referred to as the Axial Age, where thinkers in Israel, Greece, China as well as in India began to place a much greater importance on ethics rather than the outward performance of religious ceremony (in Indian terms, the Vedic sacrifice.)

Just after the birth of his son, and despite him being the likely heir to his father’s throne, he suffered what we might now describe as an existential crisis. He came to see that whatever happiness he might gain from his surroundings, they would all certainly pass – sickness, infirmity, old age and death were inevitable. As a result, he renounced the world and lived for six years as a wandering ascetic, before concluding that such austerities were getting him nowhere. In Bodhgaya, he sat beneath a peepal tree and meditated on what he had learned. That night, the prince ascetic Guatama ‘awoke’ : and from then on, he became known as the Buddha – ‘the Enlightened/Awakened One’.

After some hesitation, he decided to teach what he had learned, firstly to five of his former ascetic friends in the Deer Park at Sarnath. For nearly forty years he taught his system, before dying (or passing into Nirvana) at Kushinaga.

The system he devised was essentially very simple, and followed the ancient Indian formula for diagnosing and treating an illness. He posited what became known later as the Four Noble Truths : that life is unsatisfactory; that the cause of the dissatisfaction we experience is our holding on to things that must inevitably change; that there is a way out of this situation; and that the way out is to follow what became known as the Noble Eightfold Path, which amounted to ethicised knowledge and action.

On this base, a series of religious traditions have been built. Buddhist schools believe that the tenets/teachings of their group go back to the Buddha himself, often claiming that such teachings were only revealed for those ready for them, and sometimes that such new teachings represented a further ‘turning of the wheel of the Law’. Modern skeptics might perhaps recognize retrospective validation attempts for doctrines emerging to suit new conditions. Part of the problem of early Buddhism was what the Buddha had left unsaid : ontology, epistemology, whether Gods existed or not, the exact nature of karma, whether any type of permanent ‘self’ actually existed, what supposedly transmigrated when nothing was permanent – all of this had to be worked out later. But each new development brought new types of art with it.

The most common figure in Buddhist art is, of course, the historical Buddha himself. Often known as ‘Shakyamuni’, meaning ‘Teacher of the Shakyas’ from the name of his people, he is very frequently shown in one of the following mudras :

To this day, a very large number of the figures of the historical Buddha are in one of these forms, and this applies across the Buddhist religions.

For the first few hundred years of Buddhism, it was largely restricted to a part of India and is generally held to have been aniconic – if the Buddha was represented at all, it was by his footprints, by the Wheel (of the Law, with eight spokes for the eightfold path), and increasingly by the growing cult of relics centered around stupas.

Two developments changed Buddhism from a local Indian cult into a world religion : first, and most importantly, its adoption by the Indian Emperor Asoka, and his sending of ambassadors as far as China and Alexandria; secondly, philosophical changes within the tradition moved it from a solitary path of individual release from suffering into one focused on the eventual Buddhahood of all sentient beings. These were important changes, not least if Buddhism was to develop and spread beyond the Indic cultural area.

These changes were codified in the first few centuries CE in a movement that became known as the Mahayana (‘Great Vehicle’). An entire cosmology evolved, centered on Buddhas of the past (eg Dipankara), the Future (Maitreya), and of the directions etc. Boddhisattvas emerged, a new category of being perhaps analagous to Buddhist ‘saints’ who had delayed their own enlightenment in order to help others achieve theirs.

Strong foreign influence can be detected by scholars : Maitreya may be related to the Indo-Persian God of Light Mitra; Avalokitesvara, the Boddhisattva of Compassion, to the Indic Shiva (and his famous 6-syllable mantra Om mani padme hum a reaction to the Shaivite 5-syllable Om namo shivaya); and, most importantly of all for the future transmission of Buddhism eastwards, the first anthropomorphic Buddha figures emerged in Indo-Greek Gandhara. The Gandharan area came to be ruled by the Kushans, in whose Empire many cultures thrived and undoubtedly influenced each other. The Kushans provided the link territorially between Han China, Parthian and Sasanian Persia, and the Roman West, and we are certain that trade along this route was significant at this period. Gold, silver, furs, metal, wine, and tin passed east; gemstones, silk, peacocks, spices and cotton travelled West. And ideas, of course, travelled too – indeed, they may have been the most important travellers of all.

The ‘Silk Road’, then, was a prime mechanism for the dissemination of ideas that later developed more in isolation as the continuity of peaceful contact between areas of civilization broke down. Meanwhile, Buddhism within India itself was coming under sustained pressure from other religious trends, and was finally largely ended by the Islamic invasions of the North. Buddhism as a religion of interiority requires perhaps more than most religions settled, peaceful conditions in order for the monasteries that have always been its bedrock to survive.
Many of the traditions that had developed in India, and in particular Tantra, had been slowly absorbed into Buddhist practice at the great Buddhist monastery at Nalanda and elsewhere, and were carried up into Tibet – Tibetan Buddhism preserved and developed these traditions until the Chinese invasion of 1950 and subsequent destruction of many of the monasteries in the excesses of the Cultural Revolution. Since the flight of the Dalai Lama in 1959, these traditions have become better known in the West, as has the extraordinary diversity of Tibetan art.

From this historical overview, we can see that several related Buddhist religions developed over the centuries, each with its own distinctive art, often added to by pre- and non-Buddhist elements. Specifically :

Robert Mackay has been studying and collecting Asian and other decorative and applied arts for the last 30 years. He is particularly interested in cross-cultural exchange of goods and ideas throughout history. An MA in History from Oxford University, he recently completed a Postgraduate Diploma in Asian Art (with Distinction) at SOAS, and is a Fellow of the Royal Asiatic and Royal Geographical Societies.

Where to see Buddhist Sculpure