This website site uses cookies to track visits to our website. We do not store any personal details.
There is more information about cookies here.
Accept
Chinese Armorial Porcelain — Guest and Gray
Guest & Gray 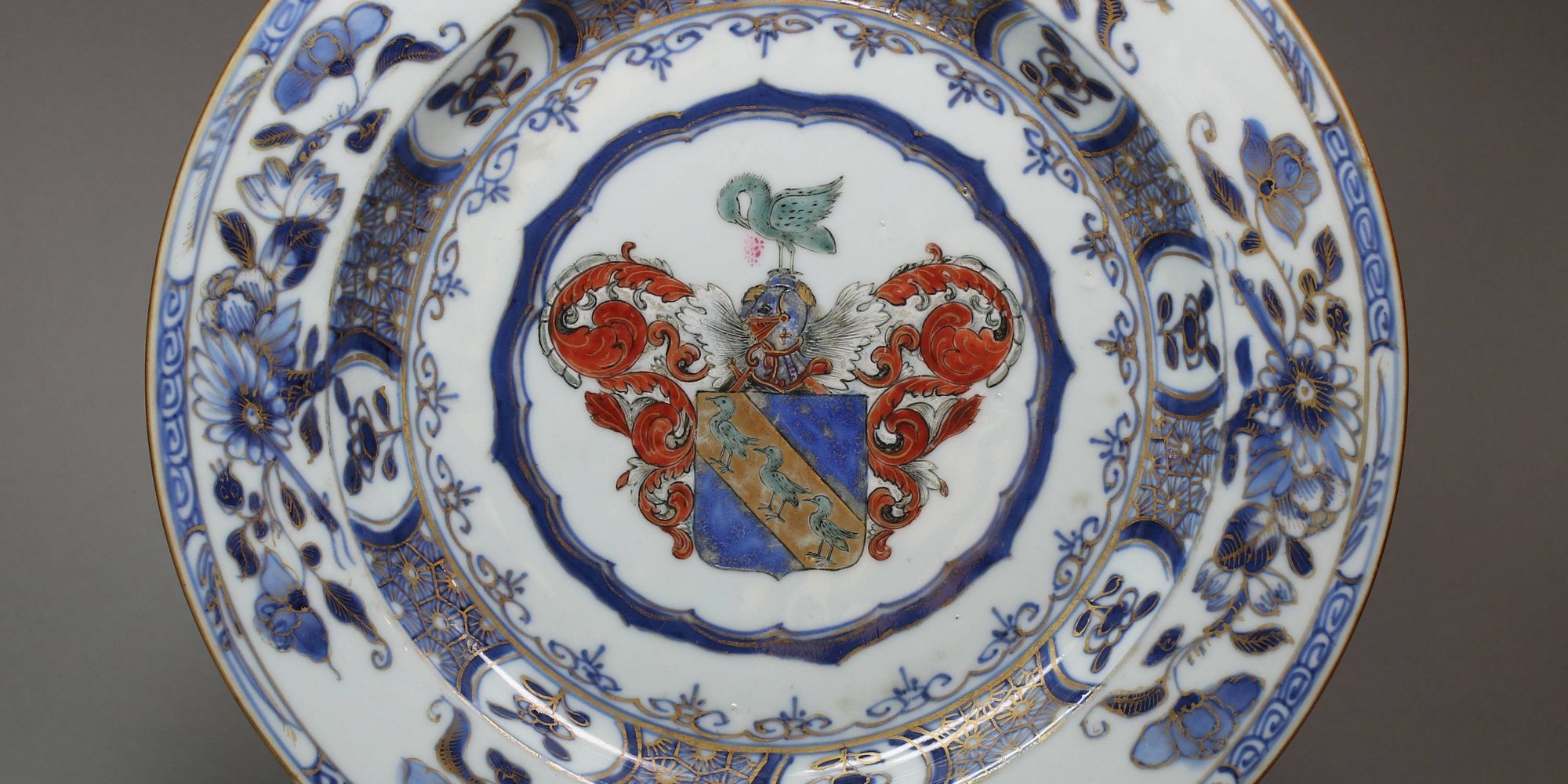 Chinese Armorial Porcelain is often collected for its designs or for the armorials on the different services. However, collecting Chinese Armorial Porcelain with its focus on families having a direct connection to the East India Company is perhaps a good reason to collect. It was part of the ‘private trade’ carried to Britain in the private cargo allowance of the captain. It was always of a higher quality than the general chinaware that the East India Company imported for general domestic use and usefully served as ballast for the cargo of tea.

So where do you start? Most importantly you need access to the two large volumes on Chinese Armorial Porcelain, 1974 & 2003 by David Howard which cover the 5,200 services identified so far as being imported via the ships of the British East India Company. These two volumes have brief descriptions on the services with arms of the family and also often mentions if there was any family connection to the Company.

David Howard’s books have lists of Directors, Governors and Supercargoes. He also suggests possible Captains who might have ordered the service. However, the best source for identifying the details of captains, the ships they commanded and dates of their voyages is to be found in A Biographical Index of East India Company Maritime Service Officers 1600-1834 by Anthony Farrington 1999. It does not tell you the destination of those voyages. That information is essential to tie down a piece of armorial porcelain to a particular captain.

For that you need access to another book. Farrington also published an equally important book in 1999, Catalogue of East India Company Ship’s Journals and Logs 1800-1834. This book is essential as it gives the information in which voyage season a ship went to Whampoa [Whampoa was the anchorage for Canton] as opposed to all the other destinations of East India ships eg. Calcutta, Bombay, Madras, Benkulen and Mocha. A voyage season is always expressed as for example 1740/1 meaning the ship was chartered in 1740 and sailed at the end of that year or in early 1741 in order to reach India or China sometime from August to October according to the Trade winds.

Illustrating an example, here is a plate from circa 1775, identified by David Howard in Chinese Armorial Porcelain, Vol. I, p.432; part of a service for the family Lennox of Woodhead, Scotland.

Howard mentions that a Captain John Lennox, of the Anson was at Canton in 1772 and also a Captain Charles Lennox of the Woodford in 1791, 1794 and 1796. So one needs to identify which one could be the owner/originator of the service.

When one checks on Captain John Lenox in Farrington’s Biographical Index of maritime officers, one can identify his career in the East India maritime service with names of voyages and ships. The voyage of 1771/2 was his third to the East and since he earned between £5-10,000 per voyage on private trade, he certainly had the financial means to make such a purchase which he would have received probably in 1775.   On looking up the other Captain Charles Lenox mentioned by Howard, one finds there were two captain Charles Lennox: one born in 1748 and the other circa 1767. The latter clearly can be ruled out as he would only be 8 years old at the date of the service. The other, born in 1748, can also be ruled out for this service as when he accompanied his relative as 2nd Officer of the Anson, it was his first voyage at this rank when they visited Canton. He would not as a 2nd Officer have been earning sufficient funds from his salary and he was only permitted minimal private trade at this rank insufficient to provide funds to order a dinner service. So we can safely assume Captain John Lennox ordered this service almost certainly for himself when in Canton as from 8 October 1772 when the Anson arrived, a date one can obtain from Farrington’s second book – Catalogue of Ship’s Journals and Logs.

Having a focus can make collecting more interesting when one can pin down the history of a piece of Chinese armorial porcelain not merely to a family, but to a member of the family who had the ability and connection with private trade that brought the armorial service to Britain perhaps 2-3 years after instruction were placed in Canton. This was done by supplying a drawing or bookplate illustrating the arms to be placed on the dinner service.

The captain or supercargo on arrival at Canton would visit one of the specialist china shops where he would place his order after perhaps being shown the current designs coming from the centre of production in central China at Jingdezhen. The order would be placed specifying where the arms were to be placed on the items of the service and whether a crest was to be added to the rim, for example. This order would then be sent by messenger over the mountains some 600 miles to the kilns. Many months later, up to 18 months later, the service would be carried by porters in baskets, back the 600 miles to Canton to await a ship designated to pick up the order. The customer in Britain might then receive their precious dinner service some 2-3 years after placing the order with their contact in the East India maritime service.