This website site uses cookies to track visits to our website. We do not store any personal details.
There is more information about cookies here.
Accept
Chinese Kangxi Famille Verte Porcelain — Guest and Gray
Guest & Gray 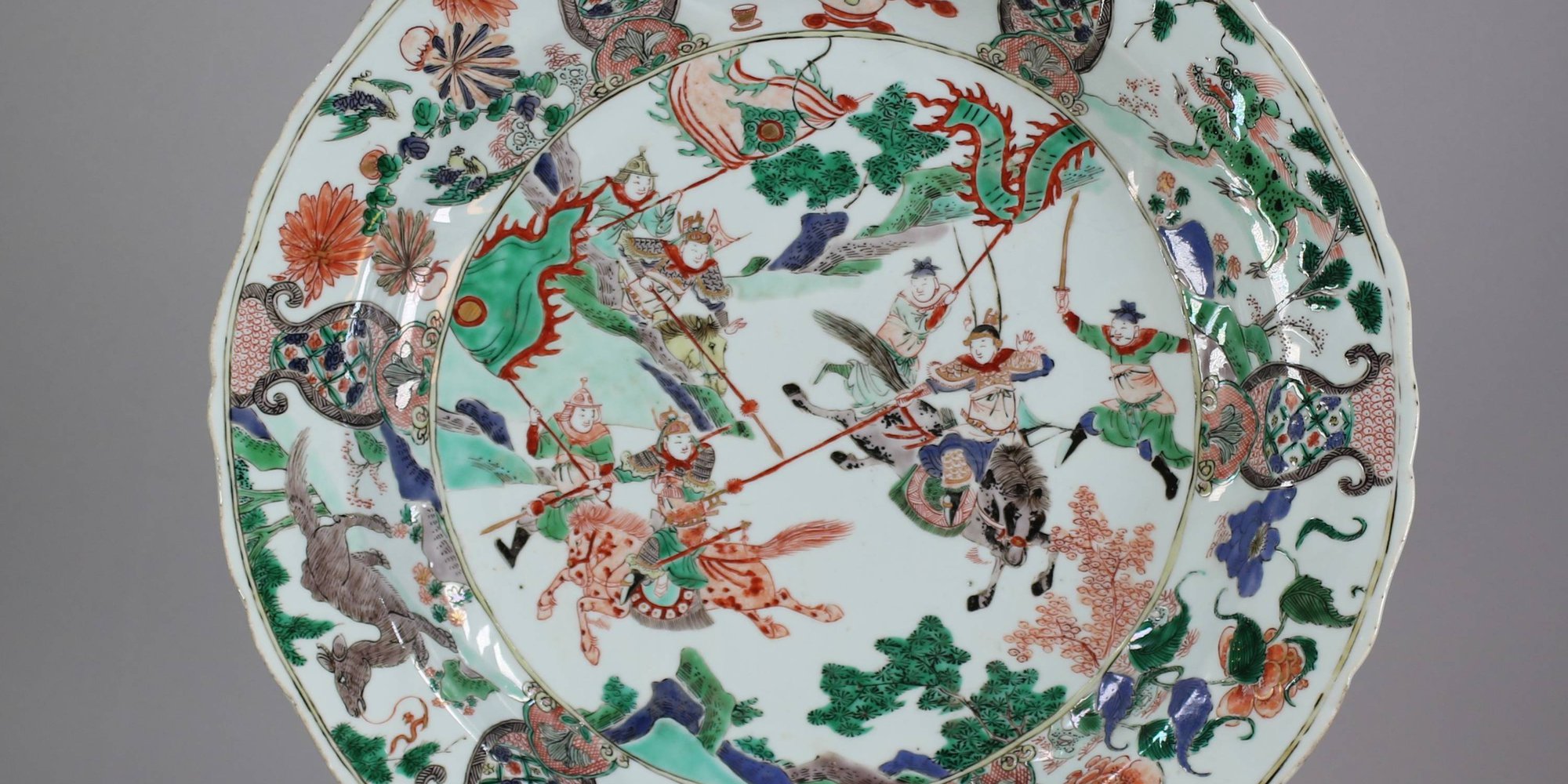 Chinese Kangxi famille-verte porcelain is innovative and with a character all of its own. The multiplicity of designs and their sophistication are to be marvelled at. Often inspired by the Ming novels the ‘The Three Kingdoms’ and the’ Romance of the Western Chamber’, many of these designs came from wood block prints at this time.

During the Kangxi period new shapes were introduced including the rouleaux and yanyan vases. The Yanyan differs from its Transitional predecessor in that it had become a more balanced and less elongated form. Ginger jars are no longer oviform in shape. Designs on Chinese famille-verte porcelain were drawn with black outlines, except in the case of figures where faces were outlined in red.

Nearly all the fine porcelain was produced at Jingdezhen, but in the case of works of art, Canton was an important centre where I suspect some good Chinese famille-verte porcelain was also produced. Jingdezhen was sacked in 1675 but by the end of the century production was once again booming due to demand from Europe, particularly from the Netherlands. During the Kangxi period there was little regard for archaism which became very popular in the following reigns of Yongzheng and Qianlong, when Imperial porcelain often had seal marks. However, a few pieces of the Kangxi famille-verte porcelain were inspired by early bronzes.

It has been suggested that by royal edict, only pieces made for the palace could have the reign mark. If this was the case the edict must have been in force for a very short time since many pieces made for export had the six character Kangxi mark. It depended on the shape of an export piece as to whether it was marked. Kangxi famille-verte porcelain vases, for example, were seldom marked at all, whereas dishes and bowls were frequently marked but usually with the Chenghua mark or more rarely with the Xuande mark.

Unlike Transitional blue and white porcelain, where the decoration has a very ‘tight’ quality and the perspective is often somewhat flat, Kangxi famille-verte drawing is more integrated, has a charming rhythm and a much truer to life perspective. At their best the green and blue enamels used are translucent, iridescent and clean; rising well above the surface. One characteristic of Kangxi famille-verte is that the iridescence is pronounced around the blue and green enamels where the glaze has contracted. However, there are exceptions to the rule.

Towards the end of the Kangxi period famille-verte porcelain gave way to porcelain with new colours including, pink (the primary colour in famille-rose) opaque yellow, and opaque lime-green and opaque turquoise. It is thought that some of these new colours were brought about by Western influence transmitted through the Jesuit presence.

It is worth noting that, as a generalization, as the Qing dynasty progressed, the designs became more detailed and delicate. Both Kangxi export and Imperial porcelain based on early prototypes tended to be over crowded.

There are at least fifty 19th century copies of Chinese famille-verte porcelain for every genuine piece, and to make things more difficult, new and very good copies are coming out of China. The 19th century copies are usually very easy to detect as the foot rims are usually quite rough compared with the rims on the genuine pieces, which are first cut with a knife and then smoothed over with a brush.

Chinese Kangxi famille-verte porcelain has very refined paste producing a fine grained porcelain, and the glaze tends to be thin, with a luminous and slightly blue glaze whereas the glaze on the 19th century copies are often thicker and very greyish in comparison. The copies tend to have lack lustre poor enamels and often no iridescence around the enamels. To differentiate between the best copies and the originals is a matter of ‘eye’. The experienced collector will see that the copies of Chinese famille-verte porcelain lack visual rhythm and the enamels and colours are slightly off.

One further point worth mentioning is the potting. Eighteenth century Chinese porcelain has been potted so the weight is nicely balanced. This is particularly noticeable in the case of bowls which feel very good in the hand whereas in the 19th century, most of the weight resides in the base.

When it comes to investment, I believe Chinese famille-verte porcelain is a good bet. There are still some very good pieces available at reasonable prices. The mainland Chinese have already pushed prices to high levels for large Kangxi famille-verte vases, but the smaller pieces are still available for small sums compared with their European counter parts.

The following book is devoted entirely to Famille Verte porcelain: