This website site uses cookies to track visits to our website. We do not store any personal details.
There is more information about cookies here.
Accept
Chinese Reign Marks — Guest and Gray
Guest & Gray 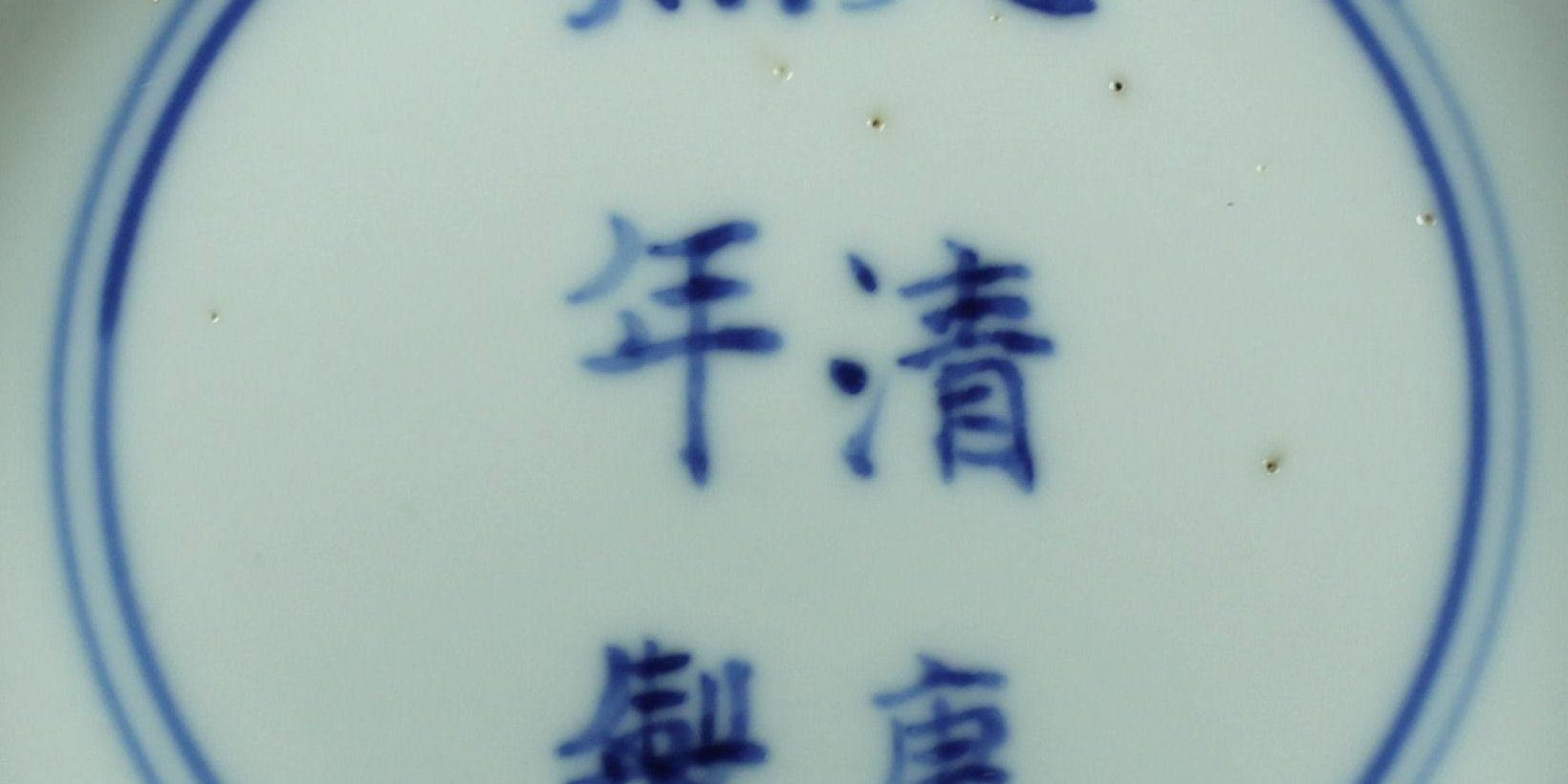 The practice of painting marks on porcelain on a regular basis was established during the Xuande reign near the beginning of the Ming period, in the early 15th century. The mark usually consisted of the reign title of the emperor and the name of the dynasty. The Qing dynasty adopted this practice which continued for 500 years, enjoying a brief revival in 1915.

The style of writing of Qing reign marks varies, but can be separated into two broad divisions within which there are further sub-divisions.

In the first division written in ‘kai-shu’ (regular or modern script), the mark consists of six characters written in two columns of three characters. It is read from right to left and in descending order. The first character reads ‘da’ (great), followed by ‘qing’ (pure), the official name of the alien Manchu dynasty. This is followed by the two characters giving the reign title of the ruling emperor. The fifth character reads ‘nian’ (year) and the final character reads ‘zhi’ (made/manufactured).

The mark below should be read as follows:

This translates as “made in the reign of Kangxi (reign title of the second Qing emperor) in the Great Qing dynasty”.

The second broad division of reign marks is written in ‘Zhuan’ (archaic seal script). It reflects the eighteenth century’s obsession with the archaic style. The seal script reign marks are translated in exactly the same way as in the ‘kai-shu’ script.

As Qing dynasty emperor succeeded emperor styles of marks varied and some of these variants deserve attention.

The reign marks of Shunzhi (1644-1662), the first Qing emperor, are known to be on a rare group of violet-blue glazed dishes. However, the practice of writing the mark on the base of an artefact only became common in the Kangxi period (1662-1722). In the early part of this reign conditions were unsettled in China. and the use of reign marks on porcelain was prohibited. The prohibition must either have been rescinded or ignored because large quantities of non-imperial commercial wares with the Kangxi mark have survived.

The majority of Kangxi marks can be divided into three chronological groups on the basis of their calligraphy, provided allowances are made for the style, shape and size of the object to which the marks are applied. Large, bold, freely written marks are rather loose and untidy. The calligraphy of the third group tends to be precise, tighter, rather small and less ‘free’ than the other two groups. The third style is especially common on a small group of imperial wares usually small in size and of superb quality; for example the ‘peach bloom’ pieces, with their rich but subtle copper-derived glaze and the ‘month cups’. These small fine pieces were probably produced later in the reign.

Another well-known group of the late Kangxi imperial pieces exhibit a character variant. These pieces decorated in famille-rose enamels have the ‘kai-shu’ character ‘nian’ replaced by ‘yu’ (imperial). They are believed to have been decorated at the Peking Palace workshops rather than at Jingdezhen, where most of the Qing imperial wares were produced and decorated.

One suspect belief is that when a piece has a Kangxi mark written in three columns of two characters rather than two columns of six, it may be Yongzheng.

‘Zhuan’ archaic seal script marks do appear on some pieces of Kangxi porcelain but only become common in the succeeding reign of Yongzheng (1723-1735). As previously stated, they are a reflection of the self-conscious archaism of the age. They are also frequently associated with specific shapes and glazes.

Vases from the Yongzheng and Qianlong periods, which are inspired by archaic forms and have cervine or elephant-head handles, often have ‘Zhuan’ seal marks. The marks appear on the base in underglaze blue or are incised or moulded. Seal marks were often used on certain types of glaze including those similutating bronze, iron and on robin’s egg – the archaic influence again.

The archaic seal mark really came to prominence on an even greater range of ceramic wares in the Qianlong period (1736-1795), largely ousting the regular script. Ceramic production at the Imperial kiln was enormous in the eighteenth century, it has been suggested that the painting of reign marks was entrusted to a very few calligraphers. The study of marks found on Yongzheng and Qianlong porcelain reveals certain distinctly recognisable hands.

Qianlong seal marks are often written in iron-red or gilt as well as underglaze blue. They can also be incised, stamped or moulded in relief. On a small group of porcelain, the so-called ‘Gu yue’ wares, puce and overglaze blue enamel marks appear. Seal marks can be found in a cartouche on the neck of a vase, where the seal has been broken up and is presented in a horizontal format from right to left.

The details of the calligraphy depend on the method used to apply the mark. These details also altered from one reign to the next, and sometimes these anachronistic quirks indicate if the mark is contemporary with the period rather than being nineteenth century or later. For example, during the Qianlong period, the six character ‘zhi’ (manufactured) when written in underglaze blue should have a small trident with five prongs. In the copies we usually find only three prongs. In the execution of the water radical of the Qing character there are similar anomalies in style that betray a later date. In genuine pieces the size of the seal should be in proportion to the base upon which it is written and the rows of the characters tend to be regular. The marks of the Yongzheng period often have a greater elegance than those of the Qianlong period, which can appear stilted. One common feature of the nineteenth century copies of the earlier Qing reigns, is that the characters are composed of ‘hollow lines’ filled with watery interiors, which are easily seen with a magnifying glass. These ‘hollow lines’ result from inferior mixing of the cobalt blue. It is also believed that the cobalt available in the nineteenth century was not of such good quality.

Comparing the underglaze-blue seal marks of the various Qing emperors, one can recognise distinct changes. These are especially noticeable in the ‘qing’ character and again, more prominently, in the water radical of this character. Typical forms of writing the water radical are shown below:

N.B. There are no recorded archaic seal marks on Kangxi porcelain.