This website site uses cookies to track visits to our website. We do not store any personal details.
There is more information about cookies here.
Accept
Stories on a Plate — Guest and Gray
Guest & Gray 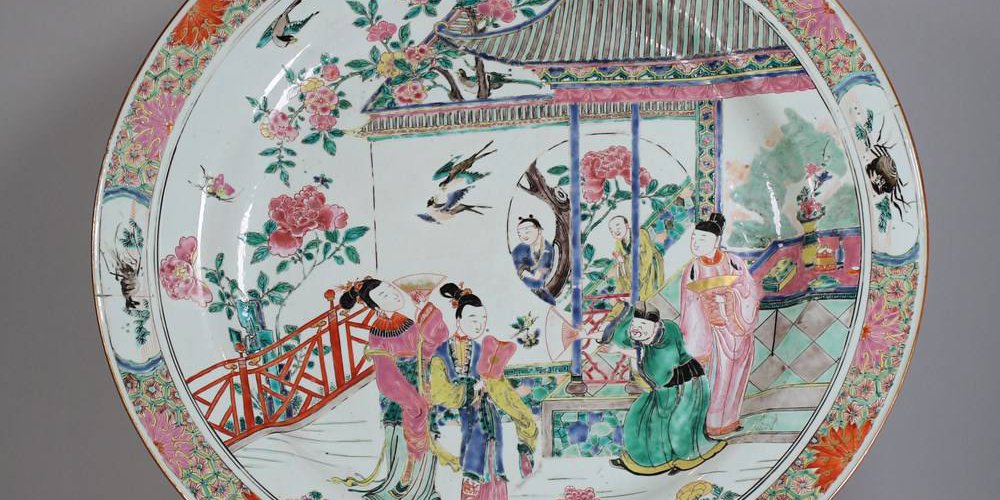 Stories on a Plate

Chinese porcelain pots, bowls and dishes, particularly those of the seventeenth century, are often decorated with scenes derived from Chinese stories and novels. Part of the pleasure in collecting this type of oriental ceramic is discovering the stories behind the pictures.

1. WU SONG AND THE TIGER

There are a number of books which help in this research and a most useful example is “Long Corridor Paintings at Summer Palace” published by the Foreign Languages Press, Beijing in 1996. The Long Corridor at the Summer Palace, Beijing, is recorded as the longest painted corridor in the world by the Guinness Book of Records and contains several hundred paintings derived from Chinese novels and folklore. The book illustrates about 130 of these and gives the associated story for each one shown. Some of these pictures can be related to decoration on ceramic wares.

An example of such a picture in the Long Corridor and also the subject of the decoration on a porcelain dish is the story of Wu Song and the Tiger. (See the illustration of the dish at the head of this article.)

The story of Wu Song comes from the Chinese novel Outlaws of the Marsh, which is about a peasants’ revolt in the Northern Song dynasty times. Wu Song is one of the heroes and the story of his encounter with the tiger, briefly told, is as follows:

Wu Song had been drinking and was on his way to visit his brother, a journey that involved crossing over Mount Jinyang. As he began to climb he saw a notice warning lone travellers to wait for others and travel in a group, as there was a danger of tigers. He ignored the warning, thinking that this was a ruse by the local innkeeper to increase business. As he neared the summit he saw another notice warning of tigers and this time he believed there was a danger but did not retrace his steps for fear of loss of face. The drink was starting to take effect so he lay down for a rest. Suddenly a large tiger charged up and Wu Song was just able to dodge the beast. Seizing his cudgel he tried to hit the tiger but the cudgel struck a tree branch and broke. He was able to grab the neck of the tiger as it attacked again and by striking its head with his fist he knocked the animal unconscious. He finished off the tiger with the remains of his cudgel. By killing a tiger single-handed, without a proper weapon, Wu Song became famous far and wide.

Lin Hejing, or Lin Bu as he was sometimes known, is a figure in literature but was a real person who was a scholar and lived as a recluse, with his servant, in the vicinity of West Lake near Hangzhou during the late 10th and early 11th centuries. His life story is included in the History of the Sung Dynasty and he was famous as a poet as well as for his flowing calligraphy. He was known for his appreciation of the beauty of prunus blossom during late winter and early spring and he also had a special interest in cranes. He is generally depicted on ceramics, in paintings or woodcuts, as well as other forms of art such as lacquer, either with cranes or with plum blossom. A typical example is shown on the saucer dish above where Lin Hejing is mounted on a donkey accompanied by his servant boy who is carrying a sprig of plum blossom plodding home through the snow. This decoration and variations on this theme were popular on dishes and pots made in the seventeenth century and early eighteenth century.

Friends who lived in Hong Kong for many years have told me that the scene shown on this dish evokes the saying “Tread on snow, find plum blossom” with some Chinese people. This appears to equate to the English saying, “If winter is here can spring be far behind”.

3. THE MUSSEL AND THE HERON

The following is a traditional Chinese Folk Story as told by E. D. EDWARDS in “THE DRAGON BOOK“, published in London, 1938:

The plate shown left has a variation of this story, with a duck replacing the heron. The English saying which may be an equivalent to the moral of this story is “Two for the price of one.”