This website site uses cookies to track visits to our website. We do not store any personal details.
There is more information about cookies here.
Accept
The Use of Copper Red in Chinese Ceramics — Guest and Gray
Guest & Gray 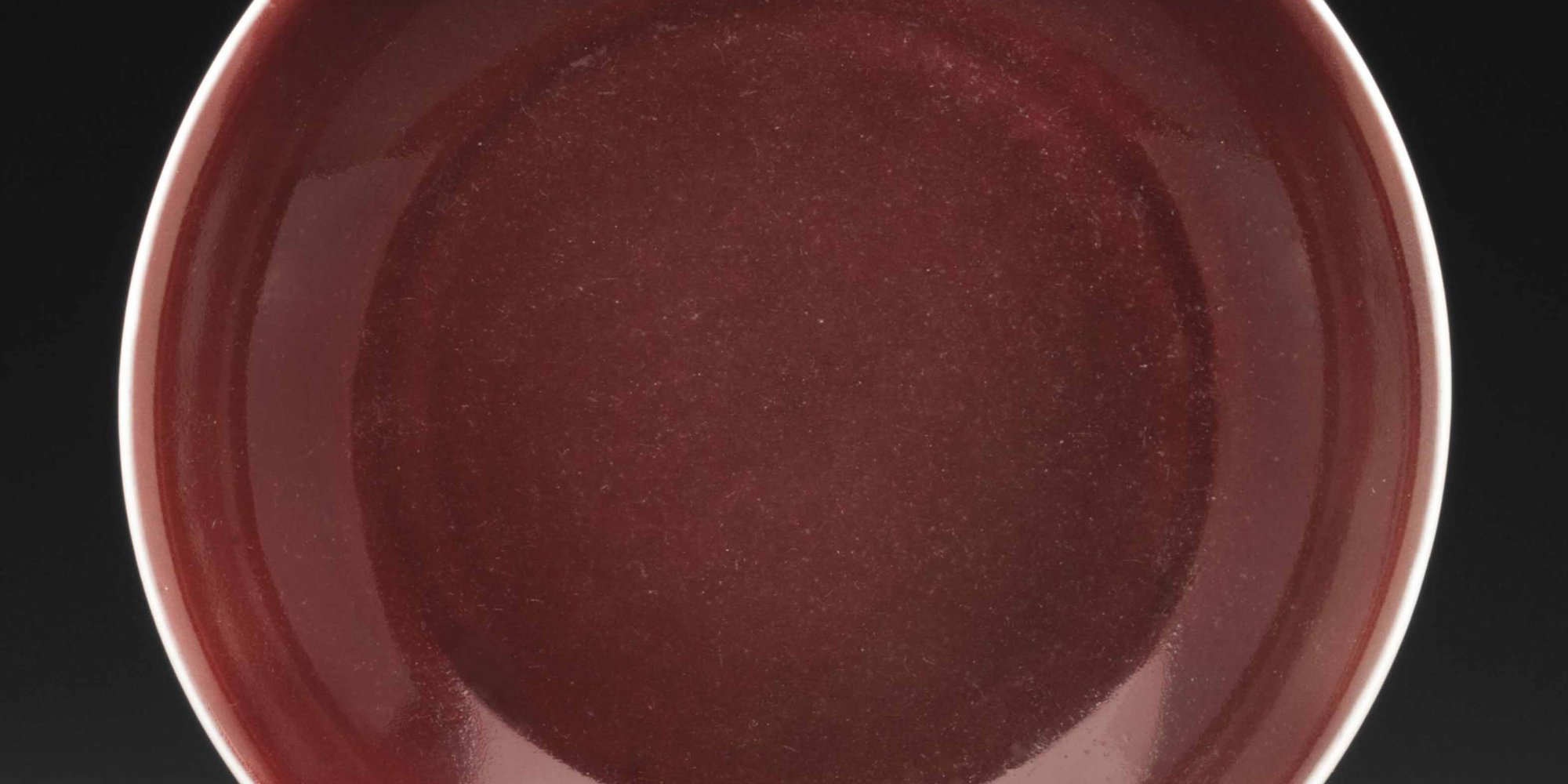 The Use of Copper Red in Chinese Ceramics

Towards the end of the Tang dynasty (618-906), the kilns at Tonghuan near Changsha were producing over two hundred different forms of ceramic for export, and were also the site of the development, if not the apparent discovery, of new techniques including the use of copper in red glaze effects (Li 1996: 55). Copper had previously been used in the Near East and then in China as a green colourant for lead-glazed ceramics, but whether through accident or design, was high-fired at the Tonghuan kilns to produce red effects during the Tang, with the earliest found examples dating to the 9th century.

The red effect produced by copper is reliant on reduction through removal of Oxygen from Cu⁺ ions. In his study on copper red wares, Wood suggests that in the copper-bearing green glazes used at Changsha, ‘in-glaze’ factors such as high ash levels (around 40%), and the presence of tin contribute to the reduction of weakly-bonded cuprous oxide (Cu₂O ) to a colloidal copper metal – ‘a prime source of the copper red effect’ (Wood 1992: 15). Later research supported the role of glaze ash and consequent amounts of carbon providing a certain level of ‘in-glaze’ reduction, but found no evidence of tin in the samples at all (Lim et al. 2016: 8497). Atmospheric reduction within the wood-fired long kilns at Changsha would have contributed to the copper red glaze effect. Though many articles suggest initial ‘accidental’ reduction of green copper glazes, examples with both red and green copper effects, and thus with copper in both reduced and oxidised form, demonstrate a deliberate technique which is generally understood to involve either altering the melting point of part of the glaze (if a glaze has already melted it is less likely to reduce), or the addition of a local, ‘in-glaze’ reducing agent. (Wood 1992: 15; Pierson 1996: 16)

Examples of both underglaze painting using pigment and ‘true monochromes’ from the Changsha kilns have been found. ‘Underglaze’ decoration involved the painting of copper pigment onto the body of the piece before glazing in a semi-transparent glaze, whereas monochrome production would have involved the use of a glaze with copper pigment within it, with the vessel either dipped or brushed prior to firing in reduction. Somewhere between underglaze and monochrome decoration, the daubing of copper pigment onto wet glaze was used to create the ‘splashes’ on Jun ware, produced in Henan Province from around the 11th century (fig.4). As described by Vandivier, the texture of such Jun ware was due to a slow cooling and consequent creation of an ‘emulsion of two glassy liquids’, refracting light at different angles and giving ‘the illusion of translucence and depth’ (Vandiver 1990: 2). To this was added a copper ‘splash’: as with examples of Changsha wares displaying both red and green copper decoration, the multi-coloured effect created by the copper on Jun ware results from the presence of both oxidised and reduced forms of copper. Furthermore, the range of colours, from black through to green and red also results from the variety of copper compositions: black caused by the thick pigment that does not dissolve and instead reoxidises into crystalline cupric oxide, pinkish-red caused by the absorption of transmitted light through colloidal copper far away from the point of thickest pigment application (Wood 1992: 19).

Apart from limited use of high-fired copper red glazes at the Rongxian kilns and other isolated locations, it is generally understood that the next major example of the use of copper pigment in Chinese ceramics was during the Yuan dynasty (1279 – 1368) at Jingdezhen (Pierson 1996: 24). The Jingdezhen kilns at Jiangxi would later gain recognition as the centre of Chinese porcelain production, but many of the wares made at the site were revivals and developments of ‘techniques and compositions that had already seen some limited use elsewhere in China’ (Wood 1992: 20). The use of cobalt blue and copper red as underglaze decoration had indeed been seen at other sites previously, but in the Yuan dynasty were used for the first time at the Imperial kiln site to embellish the earliest porcelains produced there, which generally employed a bluish qingbai glaze (PDF 2004: 7).

However, copper was difficult to use and proved much more volatile than other pigments. Before the scale of production increased in the early Ming, copper reds during the Yuan period were still very much ‘experimental’ wares. For copper red to work successfully as an underglaze pigment and for a bright red with good pattern definition to be achieved rather than a faded or ‘liverish’ effect, various conditions had to be met: ‘the glaze also had to be thick, of the right composition, and fired to the right temperature. Kiln atmospheres and cooling rates also had to be ideal […] Another difficulty with copper was its solubility, which often rendered the underglaze painting hazy as the copper spread into the surrounding glaze’ (Wood 1992: 21). As Tichane observes in his study of Yuan copper red decoration, the glaze used over the pigment was crucial, and it was very difficult to maintain a balance between a glaze that suspends the pigment but also gives clear definition. In comparing the Yuan Yuhuchun bottle (Fig.3) with the stemcup (Fig.4), we can see an example where the colour is good but the decoration hazy, and another where the clearness of line is improved, but even then is much simpler than the ‘characteristic boldness of form’ of the Near-Eastern influenced designs from the same period achieved using cobalt (Pierson 2009: 62).

With these technical difficulties in mind, the revival of copper red’s use in the Ming period (and the Hongwu in particular) has been linked by some to an apparent disruption to the supply of cobalt. However, research has since suggested that it was instead a ‘vogue […] for red’ and the consequent ‘well-considered technical improvements’ enabled by imperial patronage which were the key factors (Fance 1992: 82). The Hongwu emperor was known to favour the colour red, and copper wares found in the palace and at the imperial kiln sites suggest that red was held in high esteem in its own right rather than merely providing an alternative to cobalt (Li 1996: 209). In terms of red monochromes, it is interesting to note that although iron could have been used, it was specifically copper red vessels, along with dark blue, white and yellow, which were required according to Ming regulations regarding auspicious colours for use at imperial or state ceremonies (Pierson 2009: 67). Less refined in both body and glaze than those which would come later, imperial Hongwu copper red monochromes were not translucent due to an amount of unmelted glaze material and bubbles suspended in the glaze thickness (Wood 1992: 23).

Although continuation of Yuan forms and decoration can be seen in the cupstands, vases and floral scrolls of Hongwu copper red wares (Fig.5), as the early Ming progressed, great improvements in the control and effective manipulation of copper oxides represented a shift towards what is regarded as the pinnacle of copper red production in China. Higher firing temperatures reduced the levels of unmelted glaze material and although levels of iron impurities were lessened to improve the glaze clearness, enough iron remained to aid the in-glaze reduction of the copper to produce an even red colour, as seen in the refined stembowl (Fig.6) (Fance 1992: 84). The white lip around the rim is a result of ‘the base glaze [which is] applied over the copper charged glaze’ running down ‘from the sharp edge of the rim so that the copper beneath volatilises through it in that area’ (Medley 1976: 211-2).

Copper red wares produced during the short Xuande period (1415-35) are generally regarded as being the finest in Chinese history. Xianhong, or ‘fresh red’ monochrome copper glazes are classed generally as a ritual ‘sacrificial’ reds (jihong), and were produced at Jingdezhen for the imperial court. The composition of these glazes is key to their quality, as the highly viscous lime-alkali glaze and the short, high-temperature firing reduces the movement of glaze materials and consequent running, while the phase in phase glass separation and multitude of in-glaze bubbles (some of which ‘burst’ on the surface at high temperature to produce an ‘orange peel’ effect) give the classic Xianhong non-homogenous and slightly curdled glaze effect (Wood 1992: 26; Zhang et al. 1992: 47-8). Due to the limited movement of the glaze materials, there is not a continuous layer of red colouration but instead patches of copper, varying in thickness and scattering light to produce a glaze with a complex and rich internal texture. The passage of the bubbles rising to the surface also causes variation in colour density by disrupting the reduction-oxidation structure of the copper glaze as it cools (Freestone and Barber 1992: 59-61).

After the Jiajing period (1522-66), the production of xianhong declined dramatically, and mass production of jihong did not take place again until the Kangxi period (1662-1722), during which attempts were made to reproduce the fresh reds of the Ming dynasty. A renewed focus on the importance of tradition was advocated by the court, and so making copies of classical styles and forms ‘became a tradition during the Qing’ in all areas of art and was reflected in ceramic production through the pursuit of forgotten Ming monochrome glaze techniques (Li 1996: 267). Although it is initially difficult to distinguish between Ming xianhong and Qing imitations, there are significant differences in the composition of glazes and bodies, as the Qing glaze was not based on a Ming recipe and was instead composed anew, while longer firings at Jingdezhen during the 17th and 18th centuries resulted in a glassier, glossier glaze. During tests carried out by Freestone et al, the red colourant within a sherd of red Qing monochrome was found to be small particles of metallic copper: much finer than the cuprite of older examples and so causing a more homogenous glaze with an even spread of components, and consequently an internal texture and overall appearance unlike the Ming example previously discussed (Freestone and Barber 1992: 61).

However, such efforts to produce copper red wares during the Qing dynasty also saw the creation of new glaze effects, such as the ‘peachbloom’ glazes, which were achieved by sandwiching a layer of metallic copper pigment between further layers of clear glaze. The copper would be fired in reduction and turn a blushing red, while in certain areas the pigment, due to uneven application, would burst through the layers and oxidise to green.