This website site uses cookies to track visits to our website. We do not store any personal details.
There is more information about cookies here.
Accept
Antique Spanish Hispano-Moresque Pottery — Guest and Gray
Guest & Gray 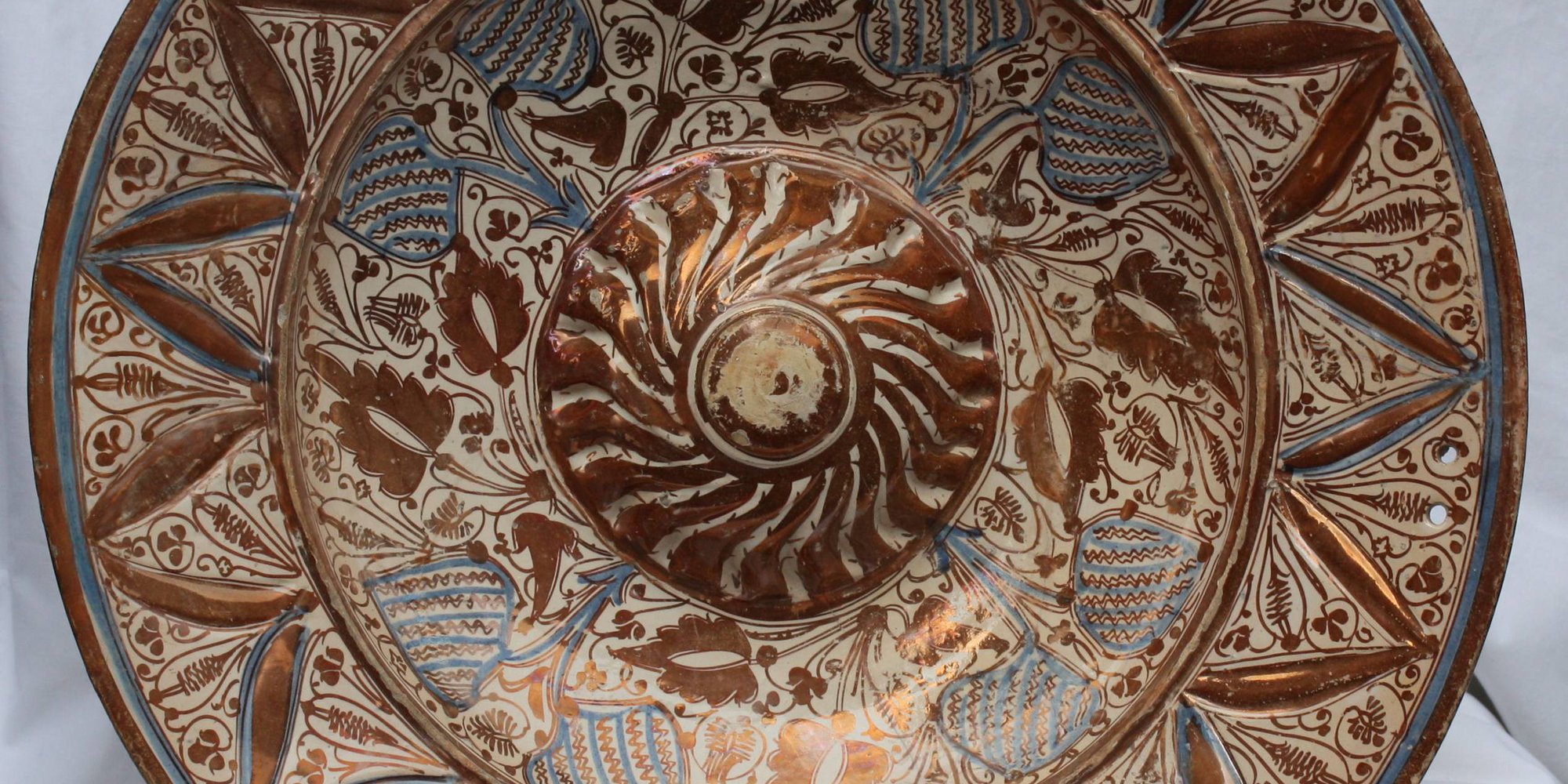 The catalogue contains one or two pieces of Antique Spanish Hispano-Moresque pottery. Antique Hispano- Moresque pottery as the name indicates was first produced in the southern Spain when it was occupied by the Moors. Here from the thirteenth century onwards lustre ware was made based on the technology used by Islamic potters in Iraq, Persia and Syria. Examples of lustre ware can be seen as early as the ninth century in Iraq. Antique Hispano-Moresque pottery wares are tin glazed and painted using a copper oxide (occasionally in the earlier pieces it was used in conjunction with silver oxide) and sometimes cobalt blue. Initially the main centres of production were at Malaga, Almeria, Murcia and Granada. In the 14th century, under the patronage of the de Buyle family, Moorish potters were enticed to help set up a pottery in northern Spain at Manises in Valencia.

Subsequent to the Christian re-conquest of southern Spain this became the most important centre for the production of antique Hispano-Moresque pottery. However, there were other smaller potteries in the area and some of their wares are indistinguishable from those of Manises. Due to the importation of Spanish Hispano-Moresque pottery into Italy in the fifteenth century Deruta began to produce its own now famous lustre ware. Italian tin glazed pottery, referred to as Maiolica, gained its name in Medieval times from the island of Majorca, a trading network centre for pottery being imported into Italy from the Spanish port of Valencia from about 1400. It is interesting to note just how complex the influences of various countries and cultures have been on each other in terms of ceramics.

China from early times had a large Islamic population and some of the early shapes and designs of the Islamic world influenced Chinese ceramics and vice versa. Islam brought about Hispano-Moresque that in turn inspired some of the decoration and techniques used in the production of Maiolica. The creation of East India Companies in England, Holland, Portugal and Sweden led to a massive importation of Chinese porcelain that commenced in the late 16th century, and by the late 17th century European ceramics started to be heavily influenced by Chinese ceramics. In our catalogue it is often possible to find late 17th century delft in the Chinese Transitional style and sometimes with Kraak designs. The Chinese Kraak wares are often seen in Dutch 17th century still life paintings. From near the beginning of the 18th century and for the next fifty years or so European porcelain factories nearly always started out by producing porcelain with Oriental designs One of the best books in English on Spanish pottery is ‘Spanish Pottery 1248-1898’, by Anthony Ray, published by the Victoria and Albert Museum.

However, one of the great experts on Hispano Moresque is Jordi Llorens. Our antique Spanish Hispano-Moresque pottery dish; ref: , see European ceramics page , is a dish typical of the late fifteenth century. Its tin glazed with copper oxide being used for most of the design together with cobalt blue for the narrow bands. The shape of the dish is inspired by European alms dishes, the swirling panels are filled with tautly drawn stylised flowers and on the back there are strongly drawn scrolling ferns, a motive typically used at Manises.