This website site uses cookies to track visits to our website. We do not store any personal details.
There is more information about cookies here.
Accept
History of Antique English Delft Drug Jars — Guest and Gray
Guest & Gray 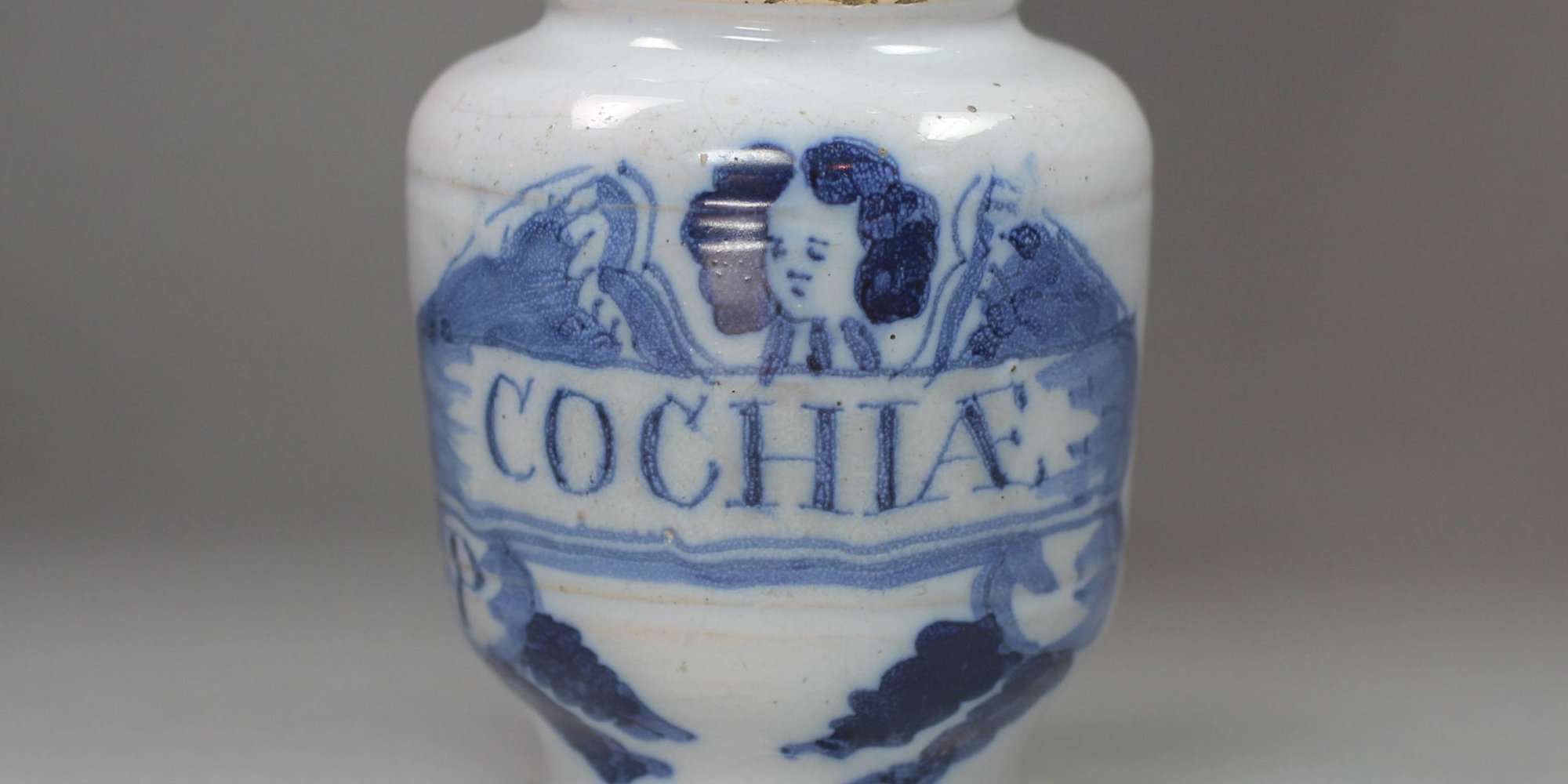 Delftware is a type of tin glazed blue and white pottery that, as its name suggests, originated in the Low Countries and was produced from the 16th century onwards. The tin glazing confers a smooth white opaque finish that gives the pottery its characteristic lustre and “feel”. The blue colour comes from cobalt oxide. English potters adopted the techniques and produced what is now known as English Delftware with the main centres in London, Bristol and Liverpool. Within London the best known were in Lambeth and Southark, although the first potteries were in Norwich. Of the many items produced, usually for domestic use, the drug jars or apothecary jars are amongst the most collectable, not only for their characteristic appearance but because they give a unique insight into the practice of medicine in the prescientific era. Their ornate cartouches describe the substances commonly prescribed, many having a provenance going back to the time of Galen. Chemist shops right up to the 19th century would have rows of these handsome jars on display and in everyday use. In the 16th century there were numerous apothecary shops especially in the Royal Exchange, Cheapside, Bucklesbury and Poultry areas of London. Some of these establishments were highly ornate and prestigious, and the apothecaries devoted considerable effort to the presentation of their premises. Their ornate appearance and the new technology involved in their production suggests that the apothecaries’ drug jars were without obvious parallel in other retail trades of the time, and contributed to the imposing image that the druggists sought to convey.

The jars for liquid potions are spouted, and usually, but not invariably, have a handle on the opposite side. They sit on an elegant pedestal. Variation in the design of the spout may give some clue as to the date of manufacture or the pottery where the jar was produced. Dry jars are more ovoid or barrel shaped and they have no pedestals, spouts or handles. Most jars have a lipped rim for sealing with parchment though some have a smooth lip for a metal lid.

The patterns and styles of decoration of the jars give them their charm. Most jars are blue and white, but a small number are polychrome and these are particularly rare and therefore desirable and expensive. Jars that are dated or bear the initials of the apothecary for whom they were made are also sought after. The central feature of the decoration is the cartouche which describes the contents, usually in abbreviated Latin. “E” as in “E Mithridatum” denotes an elixir, “U” is Unguentum, an oily cream as in “U Elemi, “C” is conserve, “Mel” a honey based potion of which Mel Rosarium is an example and “Ox” was oxymel, an expectorant. One of the ways to tell an English jar from a Dutch or Flemish jar is the position of the initial letter or abbreviation. On the English jars it is in line with the rest of the inscription whereas on the Continental jars it is usually centred above. The story of Mithradatum encapsulates the fascination of drug jars. The elixir was originally said to have been concocted in the 1st Century BC by King Mithradates of Pontus from at least 65 ingredients in order to confer protection against all known poisons. Though the recipe undoubtedly underwent changes over the centuries it could still be prescribed in the mid 18th century as a general antidote.

The adornment of the cartouche adds to the appeal and may also be an aid to dating. The early jars from the mid 17th century had a simple ribbon cartouche with little further adornment. From about 1660 onwards we see the cartouche surmounted by the Angel with Outspread Wings. It has been suggested that the exuberant hairstyle of the Angel is a reference to that of King Charles the second who was “restored” in 1660. Another interesting design is the so called “Pipe Smoking Man” from the mid 17th century, tobacco having been used medicinally at the time, although alternative theories suggest he is a pagan deity, the Green Man, with vegetation in his mouth, or a Dutch “Gaper” with a pill on his tongue. A gaper was a carving, usually of a Moor, displayed on the front of a pharmacy.

Another design dating from the 17th century was the “ Peacock and Apollo” (Apollo was the Roman God of Medicine” and is the central figure in the coat of arms of the Apothecaries Company). In the 18th century we see the “Birds and the Basket”, and the “Cherub and Shell” patterns. The scallop shell was the emblem of St John of Compostella and of those who made the pilgrimage to his shrine. There may also be interesting regional variants – the Liverpool pottery decorated its jars with the Liver Bird holding a twig of liverwort in its beak. These various designs overlap chronologically so precise dating is not possible, but production of these jars certainly continued up to the end of the 18th century.

There are several fine collections of these jars on public view. The Thackray museum in Leeds contains the collection of the late Dr John Wilkinson and was during his life the largest in private hands. In London there are splendid collections at the Royal College of Surgeons, the Apothecaries Society, and the Royal Pharmaceutical Society.