This website site uses cookies to track visits to our website. We do not store any personal details.
There is more information about cookies here.
Accept
Irene Finch: Some of my Favourite Pieces — Guest and Gray
Guest & Gray 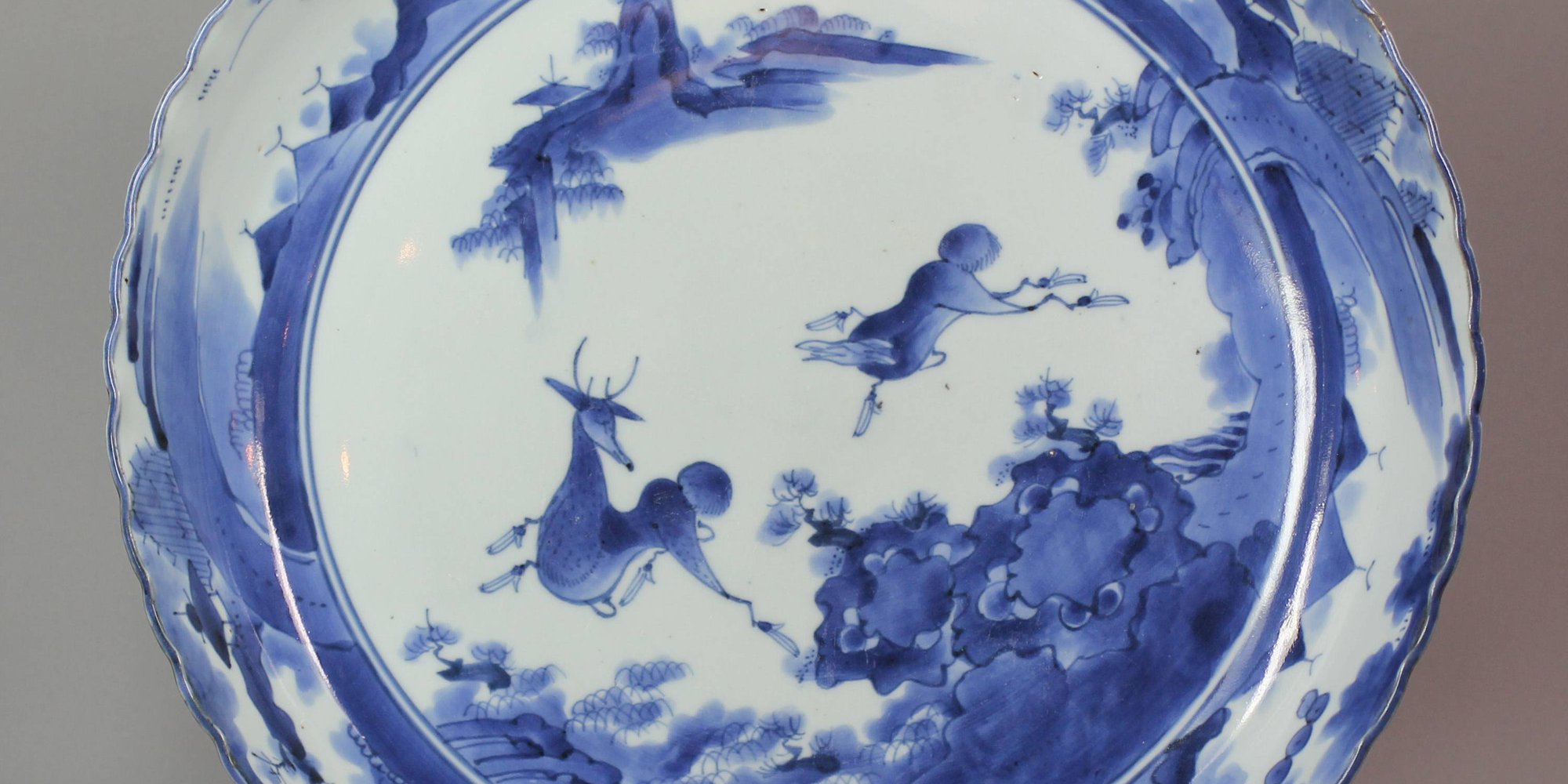 Irene Finch: Some of my Favourite Pieces

I was asked to describe a favourite piece of mine and offered four. These come from an unusual part of my collection relating to the entity “Lost Century”. They come from a time when I collected “lost” pieces that did not seem to belong to the Great Japanese Export Period of circa 1650-1730, nor to the later 19th century export period. After many problems, and with Japanese help, I made some sense and order of the pieces found in England. It seems that porcelain with polychrome over-glaze enamels continued in the mid eighteenth century but with no new styles except the stunning Nabeshima, impossible to date with any certainty. Blue and white wares were more innovative, offering three different series: the White Ring series, typically with scrolling borders and prominent white rings; the Dark Blue Ground series, with many homely designs; and lastly, the Moulded series, which included many Chinese copies. The latter two series ran together at the end of the 18th century with additional extensive brocading, leading to the Japanese Shonsui of the early 19th century.

My collection also includes earlier wares and some later ones and I am now at the stage in my life of breaking it up, some to museums, some for sale. More details of the pieces described here will be found in the publications listed below:

I have chosen this first piece (LC 127, A of A 1997, Fig.1) because it opened up a whole new world to me. I had been collecting anomalous pieces that did not fit into the Great Japanese Export Period wares favoured by the landed gentry, nor into 19th century Japan, but I could find no sense or dating. Until, that is, this dated piece came along.

It is dated Temmei, which places its manufacture between 1781 and 1788. It is beautifully finished with a high gloss and no pinholes, but it is a fairly heavy Arita piece, not Kakiemon, and still has spur marks. It dates a whole series of Japanese plates made for the domestic market, but, as I believe, exported to England in very small quantities at the time of manufacture. They had a dark blue ground and fitted the English fashions of the time, but would have been very expensive. They were perhaps brought in by ships officers who were allowed to import a limited amount of goods. At that time the English had a route to Canton (Guangzhou) and the Dutch presence was reduced. At that time there was also a new middle class developing, in part because of the Industrial Revolution, who could afford such wares and who preferred pieces which showed novelty and wealth but that were for use rather than for display. So far, however, no shards have been found here. It is nevertheless remarkable that no such pieces which could have been imported at this date, are found in other Western Museums or markets. In England there is a fair range of such pieces, though this, the only dated piece I have, was bought in Japan.

It is a typical example of the Dark Blue Ground series, with the type of pictures that we see on Hirosige prints, such as the straw hat protecting wearers from blizzards. Other roundels and the central picture are landscapes of a style which, while perhaps Chinese in origin, had been used in Japan for a hundred years. The dark blue ground is brocaded, a very Japanese feature on blue and white porcelain dating originally from a period well before this piece was made – the Oribe style pottery used it a great deal. The origin of brocading is unknown, possibly it first came from Holland, as the Japanese loved Dutch and other novel ceramics. A very Oribe (and characteristically Japanese) feature is, however, the breaking up of the brocade on the inner border into odd shapes.

The back is plain but there is a brown rim. The 12-sided shape is unusual, but polygonal, as distinct from round shapes, were popular in Japan.

I know of only one other dated example from this period in the West, but two or three in Japan in the Shibata Collection in the Kyushu Ceramic Museum. Other examples I have may be more attractive as genre pieces, but this is one of my “specially liked” pieces because it started a whole area of research.

I am very fond of this plate (JS 43,44) because it came at the end of a long search to collect an interesting series linking Chinese and Japanese porcelain. The Chinese had exported to Japan, in the early days when the new Japanese industry could not cope with demand, a range of designs based on Wanli grids or design plans. The central pictures varied, and all were made rapidly at a low price, which was noted by Dutch traders who sometimes carried them to Japan.

By the middle of the 18th century, some Japanese workshops were able to make high quality wares and started a fashion for taking these old revered designs and putting them on “good, modern” Japanese porcelain, which was well finished but still used spurs that left spurmarks. It is interesting to collect the Chinese originals and the varied Japanese copies and variants. The most rare type of Chinese design the double-arcaded border. I suspect that, because this was a rare Chinese design (indeed, sometimes missed out from catalogues of Chinese wares) the Japanese had very few and made very few pieces based on this type of border. For a long time I had a very broken Chinese example, but finally, although unfortunately not in time for my first exhibition, I found a Japanese version. It is slightly larger and much heavier than the Chinese example, with a fine brown rim and more carefully painted border. The picture inside is a copy of a Chinese holy man in a desert, done in the Chinese style, different from my Chinese version, which has two deer in a landscape.

This delightful little saucer (LC142, JS p22) is one of a pair, but I have not seen other examples published. It is typical of the mid to late 18th century Japanese Dark Blue Ground porcelain series. Dark blue backgrounds had been in use since the 17th century, doubtless based on Chinese originals, but this series made them into a feature, usually with genre designs of people, plants and birds, etc. Only later in the century was this background changed to brocading, which became very fashionable in Japan well into the 19th century.

A few examples contain jokes and Chinese references. This little dish is barbed, with a central picture, a ring of three shaped panels, and a border of six panels. Some of the pictures are ambiguous in a typically Japanese manner: is the tree sprouting leaves or birds heads? One has three frightened little men invaded by a cloud motif that the Chinese used to fill spare corners of designs. A fish has such a motif attached. This was normal for non-realistic scrolling designs but a joke to attach it to a real creature. I am not sure about the spoonbill. The Japanese copied this from Pronk designs (not flying) but it seems not to be a native to Japan and was possibly classed with strange types of animals such as the elephant. Normality reigns in some panels however: the standard wave (fish scale) brocade elaborated with half-daisies, and the central dragon, not real but auguring well.

This tiny saucer (A of A 2001 fig.8, LC 99) shows another facet of the story of mid 18th century Japanese porcelain. The Japanese had declared closure of various degrees in the early 17th century, forbidding the entry of foreign nationals and wares, with an exceptional trading facility granted to the Dutch. Although there is no documentation relating to the relaxing of these rulings, it is clear that it occurred. Relaxed regulation certainly allowed imports from China in the mid 18th century, at a time when the Chinese were developing a new export style for the West but were also copying their own earlier wares. Evidence of the more relaxed regulations is that the Japanese copied both types of pieces.

This little saucer is based on a Qianlong export style, but with two added Japanese features. One is the polygonal shape, more difficult to make than the circular forms, but much liked in Japan. The other is a revival of a very old Japanese technique, stencilling with slip, to add to the flowers. On some examples there are also impressed flowers.